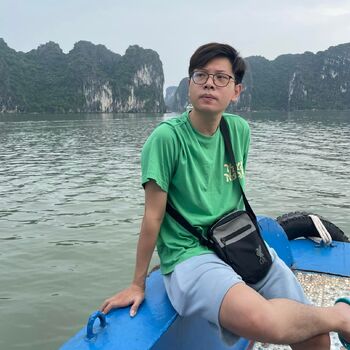 Mai Nam Hai (Vietnamese: Mai Nam Hải; born: April 5, 1991 (1991-04-05) [age 31]), also known as Bomman is a Vietnamese Facebook Gaming Partner, CSGO/PUBG former Commentator and Analyst for 500BroStudio [1] and CS:GO ex-semipro player[2] and known for his contribution in the Vietnamese CS:GO Community, but also his former toxicitiness and later calmness in his stream/gameplay.

Born and raised in Hanoi in a military-trained family, he already have his discipline and well-behaved act from early ages.
He started to play CS 1.6, and became in love with it.

He graduated from Hanoi University of Science and Technology with 26 points[3], which deemed him one of the nicknames “26 điểm Bách Khoa -man” (rough translation: 26 points from HUST).

In Apr 24, 2022, Bomman teases his marriage certificate to Minh Nghi on his own Facebook’s story [4]. Their marriage became officially finalized by tradition in July [5].

He was the Rifler/In-Game Leader for local semi-pro CSGO team, DungBeoGaming, from 2015-2016.
On May of 2017. he started streaming on 500BroStudio (his company)[6], and later (in 2018), splitted his content to this current channel to avoid confusion of the contents of the channel.
In 2019, he moved to Facebook to stream and later became Facebook Gaming Partner.

On Aug 8, 2022, Bomman announces that he moved back to Youtube to full-time streaming as his contract with Facebook Gaming Partner has been expired. [7]

He uses this to teach other players some nessessary skills and general tip/tricks to use in-game.

At some points in 2020, this series have been rebooted under the new title “Hướng dẫn <tip title> in <game title>“.

The format are pretty much the same as Demo Analysis, often with a collaborative guess (with season 5 featuring Tran Anh Dung aka Kaj1ma as co-host), mostly focused on the reported player who deemed cheating/hacking in game.

(in rare scenarios, he will also checking the teammates/enemies within the demo for further analysis, which as of now only 2 demos were in the list, Case 2 Episode 6 Season 5 and Case 3 Episode 19 Season 2)

the majority of the quotes are from his toxic-era, aka 2016-2019, where most of the times he’ll either screaming, shouting, swearing at his teammates/viewers